An exciting new research project at Haslemere Museum is currently being undertaken by Museum volunteer Tim Winter and he needs your help.

Tim is appealing for information from anyone who may know more about Hammer Vale pottery. It was located in Hammer Lane and was started in 1901 by William Wilson Stallworthy, (whose father was the local Congregational Church minister) along with James Radley Young, a highly skilled potter from Poole in Dorset. 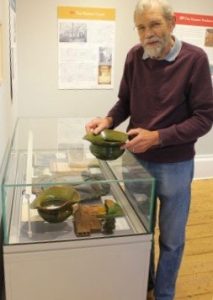 Pottery produced at Hammer included vases, candlesticks, bowls, jugs and tiles and terra-cotta garden ware as well as novelty items including model pigs glazed in various colours. Green pots with a metallic iridescent glaze, similar to jugs and ewers made at Farnham, were also made at Hammer Pottery.

The pottery was sold in local shops including Charman & Hatch on Haslemere High Street as well as more widely through agents in Sussex, Hampshire, Dorset, Oxfordshire and London. However the pottery had a rather short life.

By 1906, Radley Young had returned to Poole and then, in late 1911, W W Stallworthy together with his wife left Hammer and travelled to New York, sailing from Southampton on board the RMS Olympic. The Captain was E J Smith who only five months later commanded the Titanic on her fateful voyage in April 1912. During the 1st World War, Mr Stallworthy served with the Canadian army and his wife, Letitia, returned to live in Headley Down in 1933.

Haslemere Museum would love to hear from anybody who knows anything about the pottery or the Stallworthy family. Perhaps you have an old photograph showing the pottery buildings in Hammer Lane? Or maybe a family member in the past has talked about the old pottery – or indeed even worked there? If you have any information – no matter how small – do please get in touch with Haslemere Museum directly on 01428 642112 or by email to collections@haslemeremuseum.co.uk.