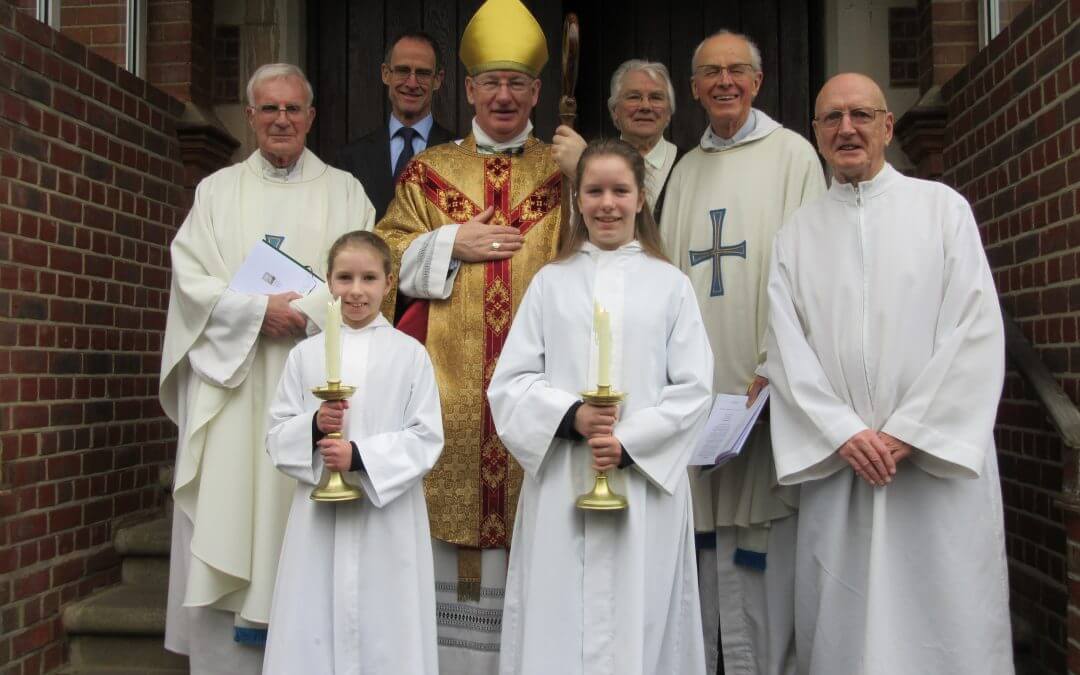 Holy Cross Hospital in Haslemere is celebrating 100 years of care in 2017 and has begun with a special service of mass led by the Bishop of Arundel and Brighton (on 25 January) at the Hospital’s chapel. The Right Reverend Bishop Richard Moth was joined by former parish priests Father Anthony Lovegrove and Father Chris Benyon, in giving thanks for the dedication of staff and supporters, past and present, and the many people who have been helped and cared for in the last 100 years.

“We were honoured to have the Bishop as our celebrant at mass, together with our Chaplain and Father Lovegrove. It was a very fitting start to our centenary year and we were delighted that so many of our friends and supporters could join us for this very special occasion,” said Christopher Hinton, the Chief Executive of Holy Cross Hospital.

“The Hospital owes its existence to Blessed Marie Therese Haze who was born in Belgium and who, in 1833, received permission to form a religious congregation devoted to works of charity. By the 1860s a community had been set up in England. During the First World War, a safer location was needed for a TB sanatorium that had been opened in Ramsgate, Kent. In December 1916, the Congregation became the new owner of Shottermill Hall in Haslemere and 33 acres of land. Over 100 years, the Hospital has evolved to meet changing needs but the underlying ethos that only the best is good enough for people in need of care has remained.”

At the celebratory mass, the Bishop acknowledged the Hospital’s 100 years of devoted service and its great work of healing and caring for the sick. He observed that Holy Cross Hospital can ‘look to the future with confidence knowing that all that lies ahead is built on very firm foundations’.

The service was followed by a celebration lunch where Sister Mary Agnes, former Matron and now a Trustee with special responsibility for the Hospital, gave her sincere thanks to Bishop Richard and described how every single person at the lunch deserved a personal ‘thank you’ for all that they do for the Hospital. She spoke about the building of the Hospital’s new education centre and how the Hospital plans to go forward by supporting the professional development of future generations of healthcare staff in the care of the severely disabled patient.

As well as the official opening of the new education centre, the Hospital has a programme of activities planned for its centenary year, which include a summer concert organised by the Friends and an exhibition at Haslemere Museum. A souvenir booklet about the history of Holy Cross Hospital has been produced and a project to collect people’s memories and photographs of the Hospital is underway.

Christopher Hinton explains: “As Holy Cross has been part of Haslemere’s community for 100 years, we know that it has touched the lives of many local people. Indeed, we are grateful to the local community as they have been one of our biggest supporters. Over this year, we would like to hear from as many people as possible about their stories of Holy Cross: perhaps you worked here, were treated here or know someone who was. Many local people will have come to our Friends’ summer fetes over the years – if you have, do tell us about your memories so we can record them and share them in the future.”

Anybody who is interested in being kept informed about centenary events or who has a memory about the Hospital that they would like to share, can email info@holycross.org.uk. Information about events and projects will also be added to the Hospital’s website at www.holycross.org.uk.