Welcome to the second report of the Haslemere Business Barometer, a quarterly survey to assess the confidence of Haslemere’s local business community.

The results of our second survey demonstrate how continued uncertainty about the UK’s exit from the European Union is causing concern for local businesses, who do not see Brexit as an opportunity for growth. Others are, understandably, finding it difficult to discern the future, resulting in less positive mood music from our local business community than we saw in our first survey. These results reflect much of what the Chamber is hearing from our members and contacts on a day-to-day basis, although we also see a business community that is determined to dig deep and continue to look for ways to thrive in difficult circumstances.

As we publish this report, campaigning in advance of a general election is getting underway. While none of us can predict the outcome of the vote on 12th December, the Chamber will continue to lobby on behalf of all members to ensure that Haslemere stays firmly on the business map. We are very grateful to everyone who took the time to complete the survey and would urge as many people as possible to fill in the next one – we need to know what you think in order to make strong representation on your behalf.

We will build on the feedback from the Business Barometer over the coming weeks and months and will continue to raise awareness of these findings with local and national influencers. 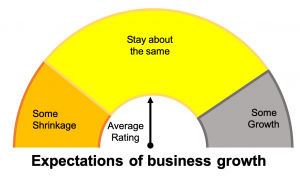 The second Haslemere Business Barometer – a quarterly survey of business confidence – shows that in the face of concerns about Brexit and ongoing national political uncertainty, Haslemere businesses are expecting little or no growth and report a slight fall in confidence from the previous quarter.

While Brexit and the associated political and economic uncertainty and fall-out is the dominant concern, some Haslemere businesses also cite worries relating to the need to attract new customers and online competition.  The focus on Brexit is consistent with the data reported by the Bank of England which suggests that nearly 60% of firms see it as an important source of business uncertainty[1].

The impact of Brexit, when it happens, is expected to be negative by 2/3rd of Haslemere businesses.  The remaining 1/3rd don’t know what to expect or believe the impact will be minimal.  None see Brexit as a business opportunity.

37 businesses operating within five miles of Haslemere centre responded to the online Business Barometer survey run by the Haslemere & District Chamber of Trade and Commerce between 1 September and 15 October 2019. Respondents came from a wide range of sectors, with retail being the largest (1/4 of respondents). The large majority are micro businesses with less than ten staff, and only three companies with ten or more employees

No growth in the next Quarter

On average, and ignoring seasonal factors, Haslemere businesses expect no underlying growth over the next three months. This is a slight reduction in growth expectations from Q2 (from an average score of 3.2 to 3.0), although this may be a statistical variation rather than a real trend.

The situation is not static however, with 20% of respondents expecting their business to grow somewhat and 20% expecting to shrink. The sample is not big enough to be conclusive, but the results suggest that retail is expected to perform slightly better than other sectors.

On average Haslemere businesses are slightly less optimistic about their prospects than they were three months ago; the average score has fallen from 3.0 to 2.8. However, this too could be a statistical feature. Results of the Q4 survey should reveal if a trend is emerging.

There is a significant spread of views with over 35% of respondents being less optimistic than three months ago and about 15% being more optimistic.

By far the biggest area of concern to Haslemere businesses is Brexit and the associated political and economic uncertainty and fall-out; this was mentioned by about 60% of respondents. Presumably some of this concern will be resolved once there is a clear way ahead. Other areas highlighted as concerns are the need to attract new customers (27%) – which includes town-specific issue such as car-parking and business closures and national issues such as levels of VAT – and online competition (10%).

Brexit – Not expected to be good for business

With the Brexit process at a critical stage an extra one-off question was added to the Q4 Barometer ‘What do you think the impact of Brexit will be on your business?’
Two-thirds of respondents considered that Brexit will have a negative effect on their business, with impacts ranging from ‘Not good in the short-term due to uncertainty’ through to ‘Disastrous’. The remaining third thought there would be little impact (‘Minimal’) or were unsure of the outcome (‘I really don’t know’). None saw Brexit as a business opportunity and only two made mildly positive comments (‘… it might push stock process up slightly’ and ‘I’m hoping that once something happens business should go on as normal, if not better than normal’). 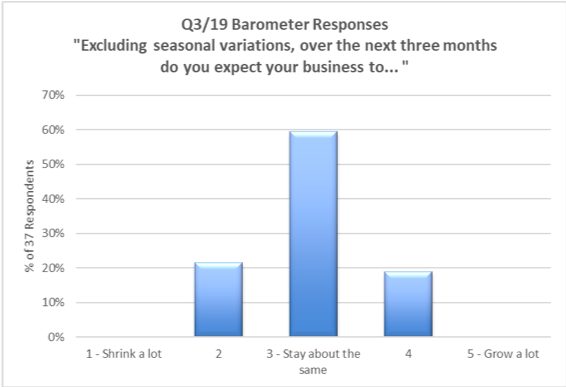 There were 37 responses to the Q3 survey with 34 of them being independents and three being part of a bigger group.
The distribution of respondents by number of staff is dominated by micro-business with less than ten staff. This is broadly in line with the population of businesses within Haslemere and its surroundings, although the lack of any larger businesses in the sample is disappointing.

The largest single sector in the sample of respondents is retail, and with a broad range of other businesses. However, geographic location is dominated by Haslemere (29) with six based within five miles of the town centre, but only two from Weyhill/Shottermill. 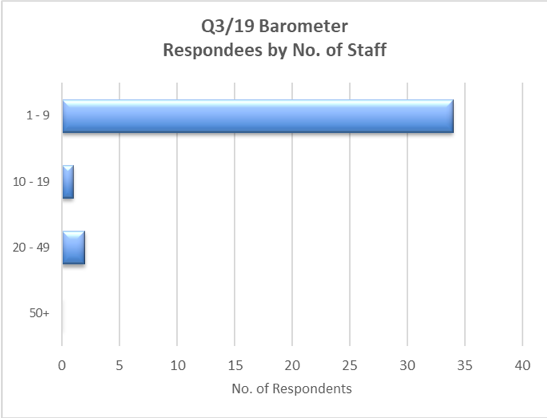 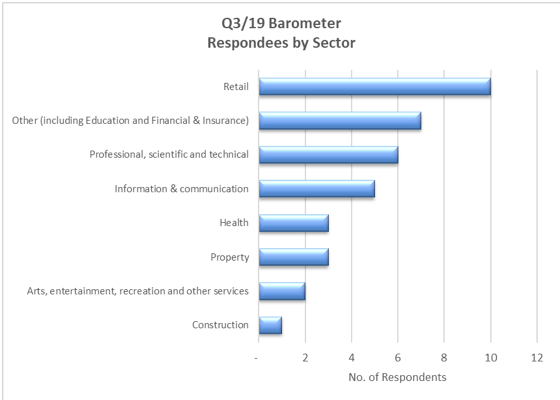