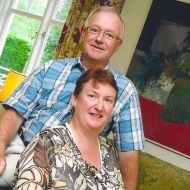 AppArt is a relatively new on line gallery and art exhibition provider. Its founders Evelyn and Gwyn Phillips set it up in February 2012. They do have a track record of successfully organising art exhibitions and sculpture trails of sixteen years. They established the Vivartis Arts Festival at King Edward’s School, Witley, where Gwyn was the Deputy Headmaster.

They attracted a wide variety of artists from the local area and further afield. These included international painters and sculptors such as Ken Paine, Philip Jackson, Nick Fiddeon Green, Nick Bashall and David Shepherd. They now represent some twenty five painters and sculptors, who feature in their website.

In October 2012 they launched their own exhibition at Secrett’s of Milford and this featured over 300 artists, many of whom they had been working with for many years. The exhibition was a great success with over 6000 visitors. They currently have a gallery studio that has just been completed at their Grayswood home and this will provide a venue for “one man art shows” in the New Year.

Gwyn and Evelyn have worked closely with the Surrey Sculpture Society over the last 16 years. SSS is the largest regional organisation of sculptors in the UK. From 2013 they have provided a full sculpture trail with over 100 exhibits and an indoor exhibition of 400 works at Prior's Field School, Godalming.

Evelyn is also a very accomplished Interior Designer and today she specialises in project managing design and build projects for private houses, mainly in Surrey.