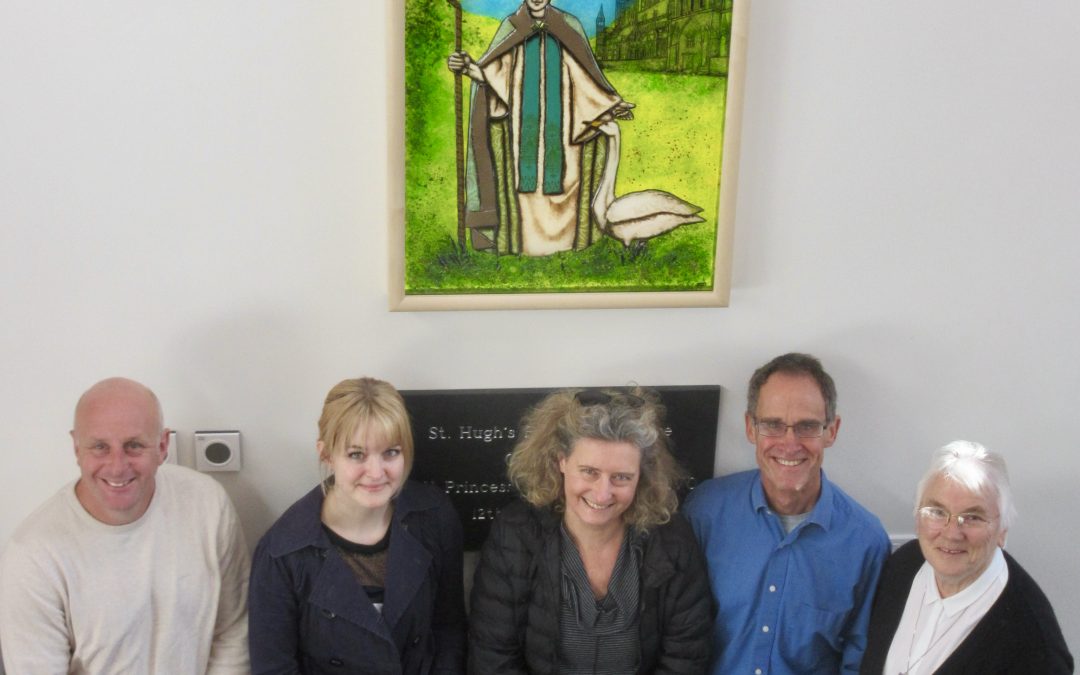 A bespoke piece of artwork has been unveiled in St Hugh’s, which is Holy Cross Hospital’s new education centre.

The backlit glass wall-art depicts St Hugh who is the patron saint of sick people, sick children, shoemakers and swans.

At the official unveiling, former Chief Executive, Chris Hinton explained that it is the tradition at Holy Cross Hospital for buildings to be named after saints and that as a great educator and patron saint of sick people, it seemed appropriate to name the hospital’s new education centre after St Hugh.

The handcrafted piece of art is made from thousands of pieces of glass, many of which have been hand cut. The pieces have been fused together at high temperatures to create one solid piece of glass. The images of St Hugh, a whooper swan which is known to have adopted Hugh, and Lincoln Cathedral where Hugh was Bishop during the reign of King Henry II were painted using traditional stained-glass techniques.

Jan Simpson from Koru Arts in Mestead, Hampshire was commissioned to create the artwork and Alison Smith, an important member of the Koru Arts’ team, completed the final painted detail. Jan says: “The brief was to create a piece that shows Hugh as a friendly welcoming face that will greet visitors as they arrive at the education centre. To get his stance and facial expression just right, we used a model to pose as St Hugh.

“It took around four months to create the artwork and during that time, the glass spent a total of nine days being fired in the kiln. The final panel was framed in beech and this was chosen because it is a traditional British wood.

“By preserving the wonderful story of St Hugh in glass, I hope that more people will be able to enjoy finding out about his remarkable life.”

The artwork hangs in St Hugh’s education centre. The centre can be hired for private business events and conferences.The flexible space seats 90 and can be divided into two smaller rooms if required. To find out more about hiring St Hugh’s, contact Jo Speed by emailing j.speed@holycross.org.uk.