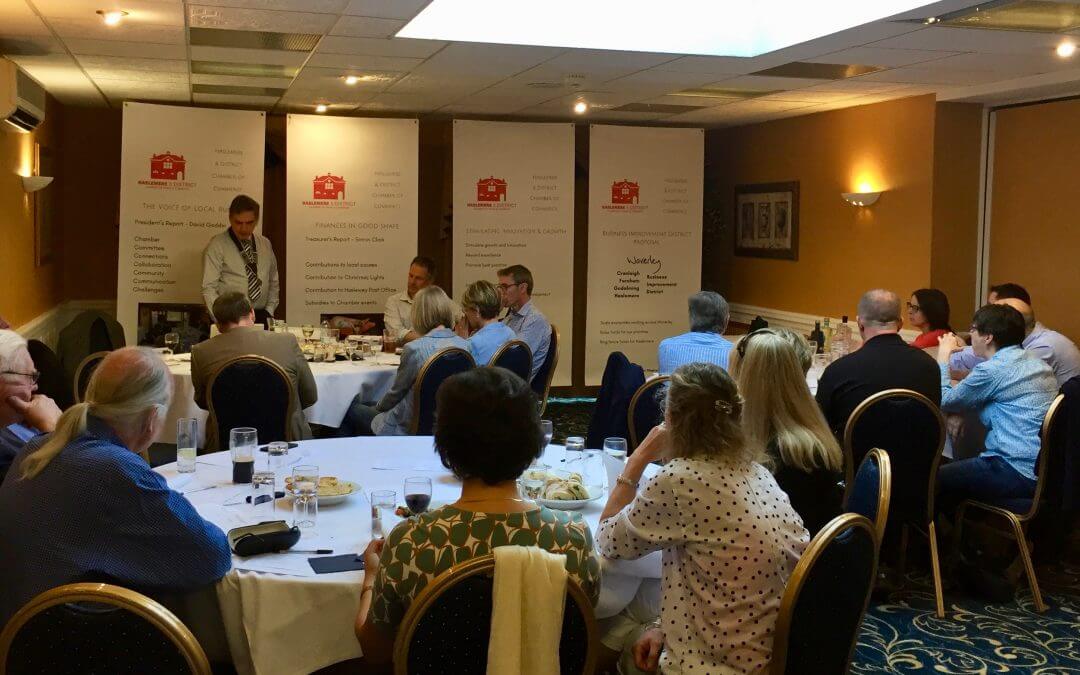 It is very easy to look at the turnout for some of our events during the year and conclude that the Chamber is not really attracting members. It is equally simple for a President to feel despondent about the apparent lack of support ‘from the floor’ – even to the point of fearing the Chamber may have outlived its purpose.

But, on balance, I believe the Chamber can – and does – fulfill an essential role in and for the local business community. Its success should not be gauged solely on the number of people attending events, but rather by the respect it commands, the influence it exerts and results that it achieves.

Our Chamber is THE VOICE OF LOCAL BUSINESS – and in a brief tour of the SEVEN Cs I want to show how that voice is being raised, and why I am confident that we can continue to play an important role in the economic future of this area.

I hope that all future committees will continue striving to represent the entire local business sector. We must remember that the Chamber is now much wider than the small group of mostly retailers who founded it 37 years ago. Times and business have changed dramatically since then. Our potential – and extremely diverse – membership could now be in the thousands.

Membership growth, while desirable, should not be the prime objective. Far better that the Chamber should lead by example, speaking out fearlessly where appropriate and seeking opportunities to foster a business environment conducive to growth, both in our high streets and the less prominent commercial locations.

The Chamber can and should continue to promote networking and training events. There is much to be gained by sharing local and business knowledge. And while bottom-line benefits for individual businesses might not be immediately apparent, by nurturing ‘Brand Haslemere’ in this way the Chamber will be making a significant contribution to local economic growth.

In the second year of my presidency, we have operated surprisingly well with an under-strength committee, that has seen several changes resulting from altered business or personal circumstances. We have been fortunate to find a number of replacements who not only bring valuable new skills but also – subject to election – will provide continuity going forward.

I wish to place on record my grateful thanks to all those who have served with me over the past two years, especially to Brenda Roper and Simon Clark who’ve endured the full term with me.

Simon has gone way beyond his comfort zone and nobly undertaken the role of treasurer for the past year, not only pushing NatWest to accept new cheque signatories, but also securing an online banking capability.

Eddie Paterson joined the Committee during the year to add muscle – and proved to be an excellent successor as vice president when Clive Rollinson stepped down ahead of his move to Devon.

More recently we have been joined by Narn, who has added a welcome new dimension to our social media activity, and Jo Speed, who brings senior management skills from Holy Cross Hospital.

With the enthusiasm, support, wise counsel and hard work of the Committee we have seen fresh interest in events and wider involvement in local and regional affairs. The Committee has also adopted a generous but prudent approach to spending, so that we can give the incoming team a firm financial footing for projects they may wish to undertake.

Later in this meeting, we will be electing the new President and Committee. The nominees bring with them a range of business and professional skills and, indeed, a good measure of Chamber experience. I am sure they will do their best to direct the Chamber for the benefit of members. But if we as individual members have specific needs or ideas we’d like them to address, it’s up to us to tell them. It’s our Chamber and our Committee: we must help them to help us.

My Committee has been strengthening links with local government – particularly at town and borough levels – and with our colleagues in the other three chambers in Waverley.

The Borough now acknowledges the importance of the business sector and gives us a good hearing. Despite the worsening pressure on council funds,

Waverley has recognised the potential in supporting two initiatives that have developed out of our work with the other chambers. These are the Waverley BIG awards and the borough-wide BID initiative, both of which have brief agenda slots later in this meeting.

At last year’s AGM we considered the possibility of affiliation with Surrey Chambers of Commerce. We have not pursued this as yet, preferring to focus more closely on the local picture. On a practical level, this may have avoided additional GDPR problems as we would otherwise have had to share our membership list.

We have continued to raise the Chamber’s profile by supporting a number of local initiatives that potentially benefit our members – and sometimes the wider community too. For example, we contributed to the development costs of the new Post Office at Haslewey; we supported the Haslemere Classic Car Show; and we supported Haslemere Hogs last year.

We have also supported the Haslemere Community Rail Partnership, the visible sign of which is the Information Hub in the station forecourt. Originally, the Chamber did not see any great opportunity in this. But it later became apparent that it could play a major role in welcoming visitors off the trains and pointing them in the right directions for their walks or cycle rides – and possibly also into local shops, pubs and restaurants. There is also an opportunity for the Chamber and its members to promote themselves within the Hub and in its shop window, which is passed by thousands of people every day.

We have also contributed to the cost of installing the Haslemere Christmas lights – mainly because the 50/50 Club, our private members’ lottery, is still running in the background, and we have a moral obligation to use the 50% of the money raised for projects such as the Christmas lights. The other 50% each month goes as a cash prize to a lucky participant. The number of participants has dwindled and some of those who remain are no longer Chamber members. My Committee decided recently that because of this we should close the 50/50 Club, but we have not implemented this in case the new Committee wishes to revitalise the club.

Our other major community interest is of course the Haslemere Business Centre, which has just celebrated its second anniversary. I understand that the centre enjoys high occupancy levels, with the result that it is performing well financially. It will shortly become a significant contributor to Chamber funds, facilitating even more opportunities for business promotion. A special word of thanks to Craig McGowan and his fellow directors for their work with the centre.

We’ve had another good year of media coverage, especially in the Herald, which has allowed us numerous opportunities to comment on matters of largely business interest. Mostly we’ve been on page one, and sometimes in the lead story.

In haslemerechamber.co.uk we have evolved a website that is, I believe, streets ahead of the other three Waverley chambers’ in terms of standards of content and presentation.

We use the weekly email Newsletter to highlight news from the website, and drive traffic to it. The Newsletter enjoys a weekly ‘open’ rate of about 30%, which is not bad – but not good enough if we are to communicate effectively with all our members, and with others who wish to use the Chamber as a source of local commercial news. Both website and Newsletter would benefit from much more input from members.

Our Twitter stats are looking good. We post a lot, using the #haslemere hashtag and we try to retweet members and other local accounts as often as possible. If you are on Twitter, make sure you are following the Chamber and please retweet us.

One must not overlook the importance of networking in the communication process, and our relaunched events programme – including the Breakfast Club, Chamber Drinks and specials, such as the Bank of England talk – has given members opportunities to talk, listen and learn.

I recall listening to Julianne Evans’s end-of-Presidency report five years ago, during which she bemoaned the parking situation. Little did I realise that I would be in the same position today. We still have problems over car park charges and facilities, especially for the town centre and Wey Hill. I expect that the next President’s reports will also have a familiar ring.

Both the Town Council and the Chamber have been involved in talks with Waverley on the parking issue: we have called for a co-ordinated charging strategy across all providers to regulate parking behaviour. In a related issue, we have called for urgent soil testing at the Fairground car-park to establish once and for all whether development of the site could be an economic proposition.

The other major challenge that I can see is the future of our retail sector. I cannot stress enough the importance of vibrant shopping areas. It’s not for the Chamber to tell retailers how to run their businesses, but we can extend a hand of support to those prepared to grab it.

You will possibly have heard the term ‘Waverley Joint Chambers’. This is purely a convenience title used when the four chambers work on joint projects, or need a common approach to the council. I can assure you that all four chambers are proudly independent, and the intention of the current leaders is to stay that way. However, we enjoy cordial professional relationships.

On a personal note, this evening brings my time on the Committee to an end. I hope that history records my contribution over the past five years as positive – but even if I am being overly optimistic, nothing can spoil the pleasure of serving the business community in this way. I thank you all most sincerely for allowing me the privilege of office.